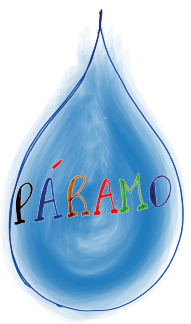 “We tried to capture this as a cycle around water, that’s why we drew a drop in the middle of the Páramo, because Páramo equals water, it is a water factory.” - Workshop Participants, Sogamoso, 15th January 2022 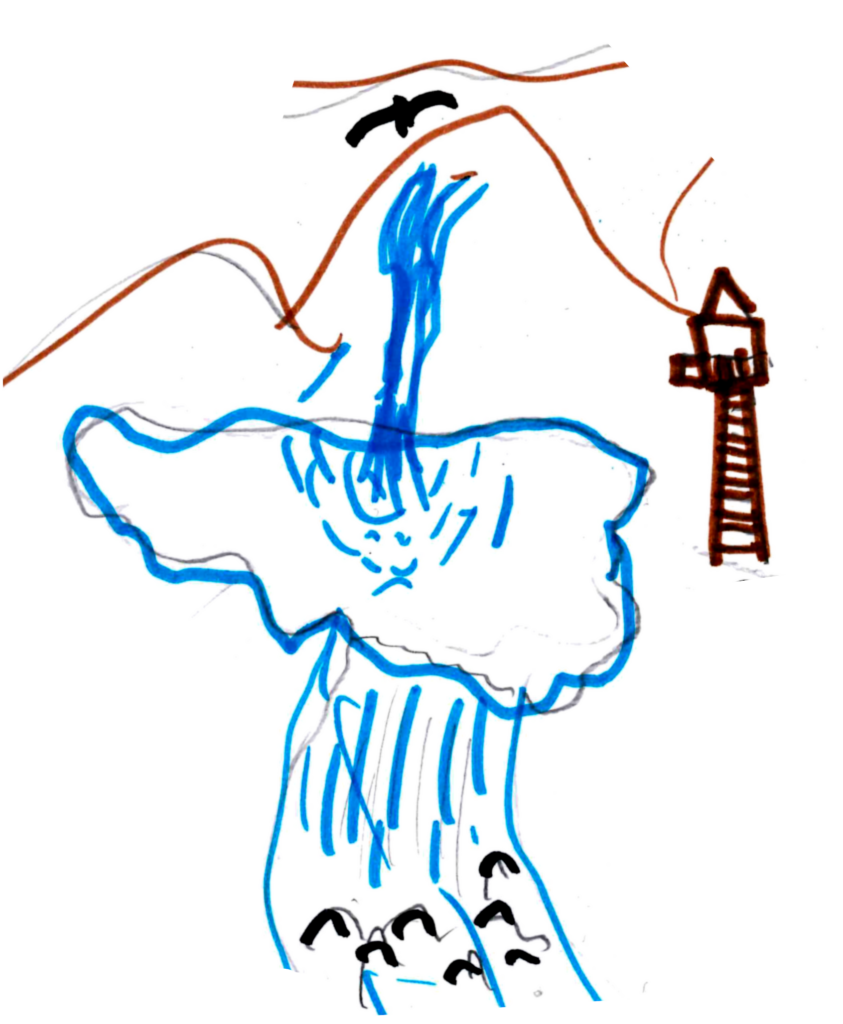 “Here you can see that the river is right in the middle which, as we discovered throughout the workshops, is the common denominator of what all the personas agree to conserve. Because without water, after all, no one could live.” - Workshop Participants, Sogamoso, 15th January 2022 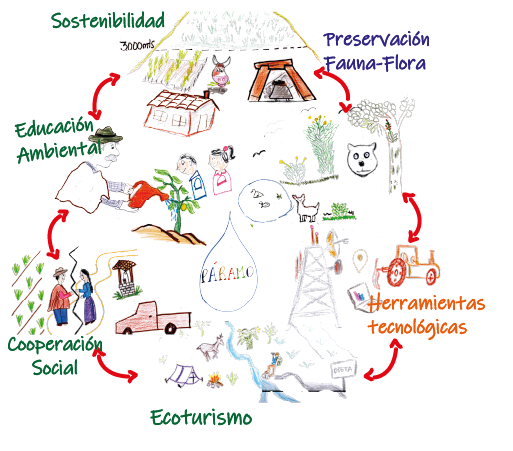 “Sustainability is trying to keep activities in a way that generate a positive impact [on the environment], but also foster the economy, because obviously people need to cover their needs. For sustainability to take place, there must be environmental education, that’s why here we see the campesino sowing a plant and the kids are there to learn. Thus, we reach the topic of social cooperation, when there is cooperation, work is easier and it is possible to stock up the local markets, like what they did in the past with the convites. Then it comes the ecotourism, which allows more sustainability. Then we touch upon technological tools, because they are part of the support to the work on the land, so we could be more up to date, and as a tool for communication, the use of social networks. And so we move into the preservation of fauna and flora. For sustainability to be possible, we must give space to the different species and understand that they are not invaders, we are the ones who invaded their ecosystems.”- Workshop Participants, Sogamoso, 15th January 2022 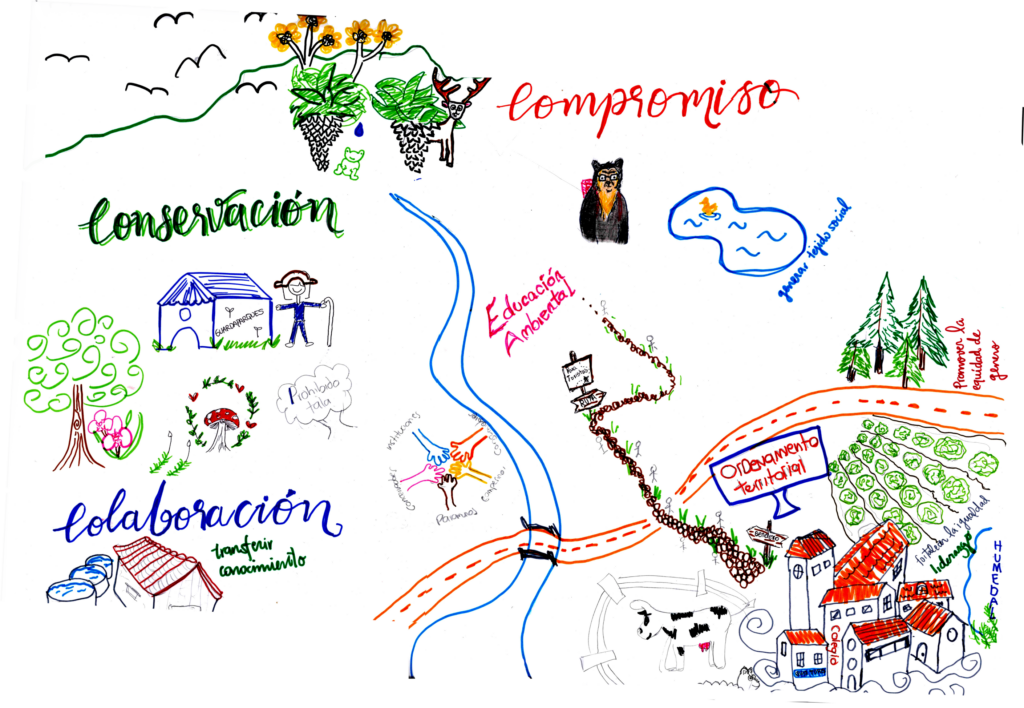 “We chose the 3 Cs, which are Commitment, Conservation, and Collaboration. These values are really important for the Páramo and the ecosystem to work together with synergy. Some values there are the campesina household regarding knowledge transfer. To promote gender equality, to strive for inclusion. Also, the forest wardens, who carry out an important role, closer to the Páramo. We also added environmental education and territory organisation as part of the processes that must happen continuously to generate social fabric, precisely as the goal of that convergence.” - Workshop Participants, Sogamoso, 15th January 2022 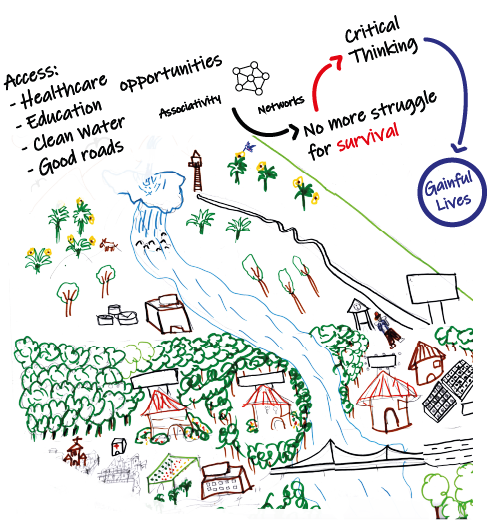 “We organised the territory, not from a place of prohibition, but on the foundations of access to basic needs: Healthcare, education, clean water, and - something very important- appropriate roads. These 4 things generate opportunities, and when we have opportunities we can associate and create networks. That way we can prevent a constant struggle for survival, which in turn generates cooperation. When there aren’t struggles for survival, critical thinking can emerge, aided by education. And when there is critical thinking, well, people will not sell their territory. And ultimately all of this will generate gainful and dignifying lives, and with gainful lives there will be justice and, hence, peace.” - Workshop Participants, Sogamoso, 15th January 2022 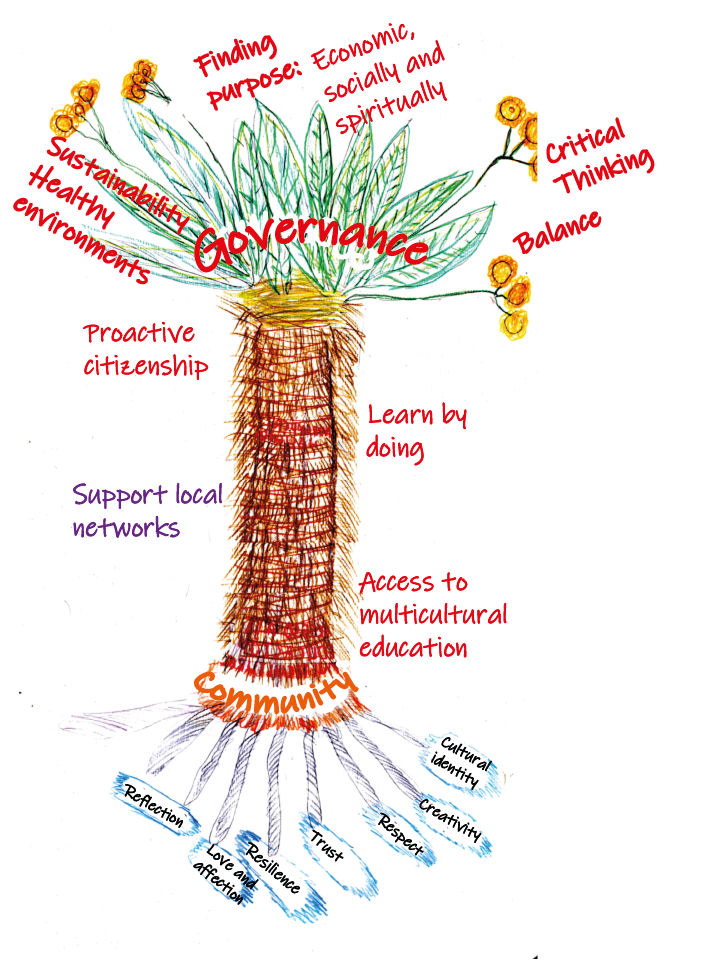 “Here we wanted to represent by using the emblematic frailejón (Espeletia). In the roots, we put some founding values that are going to generate all the growth from the use of environmental goods and services. The idea was to represent the future like a living organism, that is nurtured by, and transforms, the elements and that – in turn – produces and reproduces itself.

Underground, at the roots, we wanted to nurture that organism with the values here.

The stem contributes a lot because it represents how the whole community is involved.

The part of the organism where everything is processed, where things are made to work, we drew in the leaves, which we summarise in the word governance, that balance between the action of the government and the convergence of society, with an economic system that can bear the fruits, or the flowers in this case.”
- Workshop Participants, Sogamoso, 15th January 2022 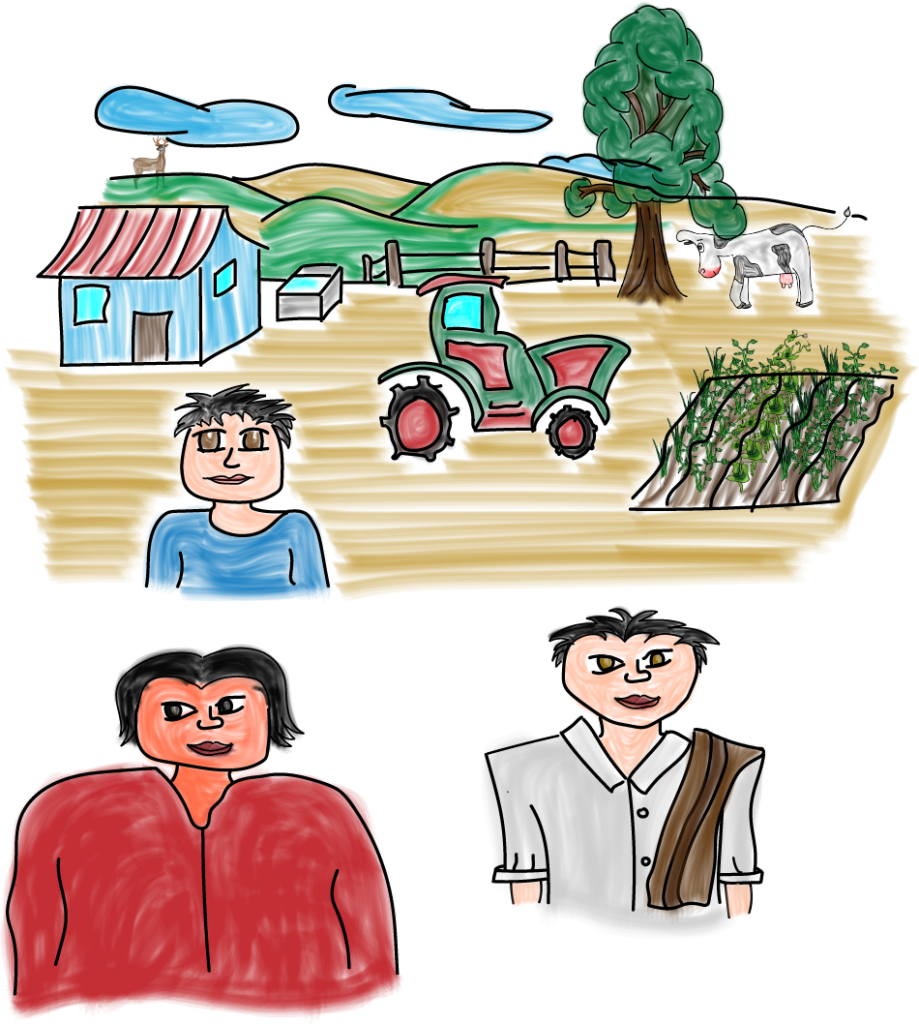 Doña Úrsula and don Plinio have always worked on, and lived out of, the land, although only a few years back they went up to the Paramo looking for arable land. Work with crops and animals is their bread and butter, hence they are proud of being campesinos. They know the cycles of nature very well, thus adapting easily to different types of crop depending on what is more viable. Don Plinio is from the region and learnt all he knows from his parents and from some short courses he has taken. Doña Úrsula is not from the region, but she is well versed in agriculture engineering and knows how to manage technified crops if needed. Tomasito likes living here, but changing school these many times has made difficult to make friends, and more so now that he has to walk 1 hour to get to his school.

They go along with:  Cows, Crops, Paramunos

Sometimes they do not go along with:  Conservationists, Civil Servant and Institution when they design policies without consulting 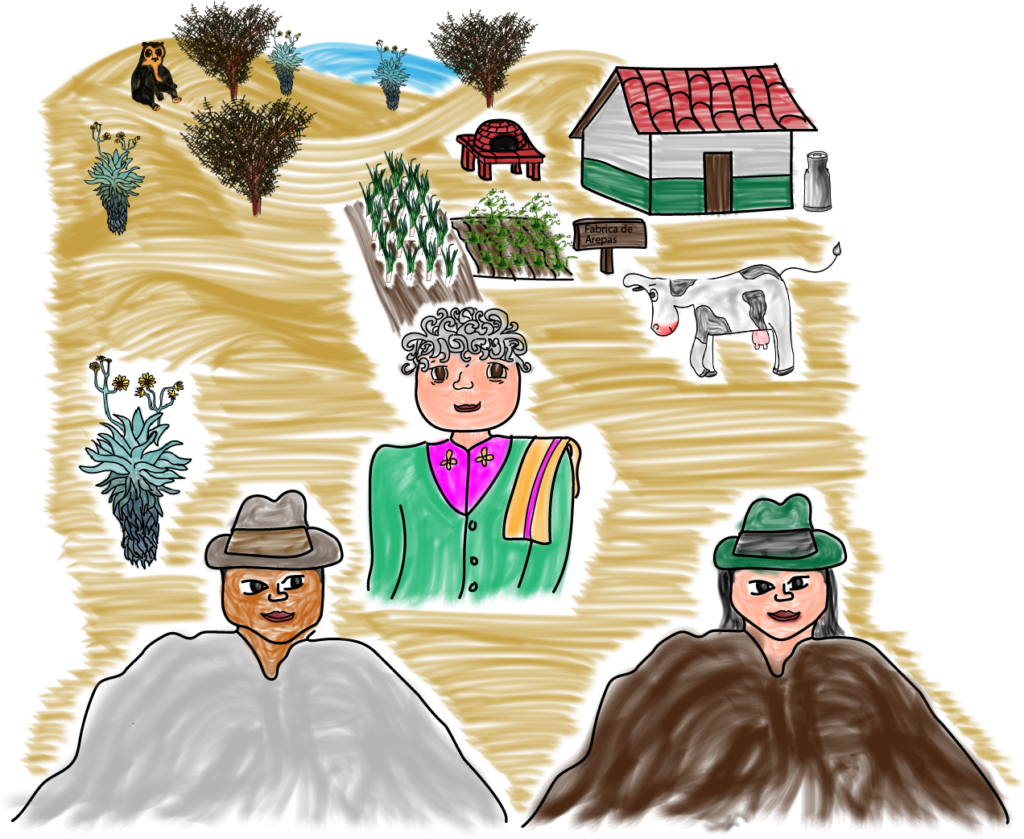 Doña Marina, don Eustasio y doña Clelia have lived all of their lives in the Páramo, hence they like being called Paramunos. They know each nook and cranny of their land like the back of their hands, and know every detail of how to work and look after the Paramo. While in there, they have worked with small-holding agriculture in different crops (potato, peas, onions), but recently it was proposed to Don Eustasio to look after and milk a cow, which he accepted as milk is what has a better market at the moment in his opinion. They also have a small substinence crop and share most of the labours there. Doña Clelia’s arepas are also very popular in the region.

Sometimes doesn’t go along with: Some campesinos, specially when they are outsiders. Civil Servant and Institution (when they bring non-negotiated prohibitions) 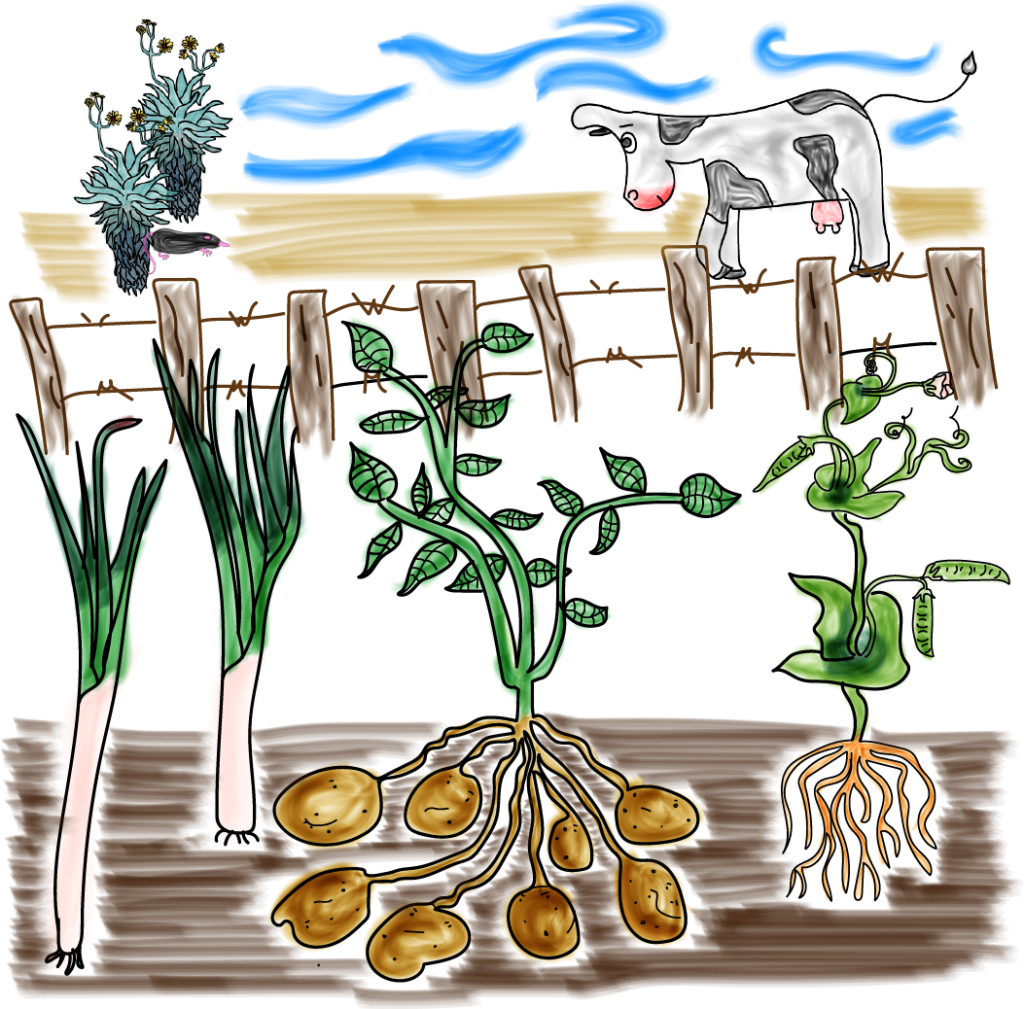 Onion, Potato, and Peas are a popular trio in the Páramo weather, although there are of course many other crops that also do well in the cold. They have supported campesinos for a long time and historically have provided sustenance. However, the need to burn in order to sow concerns some people and institutions.

Similarly, they require parceling up and fencing, which often clashes with the Páramo, which is believed to be affecting the ecosystem. Nonetheless, some believe they could be compatible.

Some crops have became noticeably less profitable in recent years, thus making many campesinos to abandon them and replace them with cows.

Goes along with:  Campesinos, Paramunos.

Sometimes doesn’t go along with: Native Species, The Páramo, The Cloud Forest, Conservationists, Cows in ocassions. 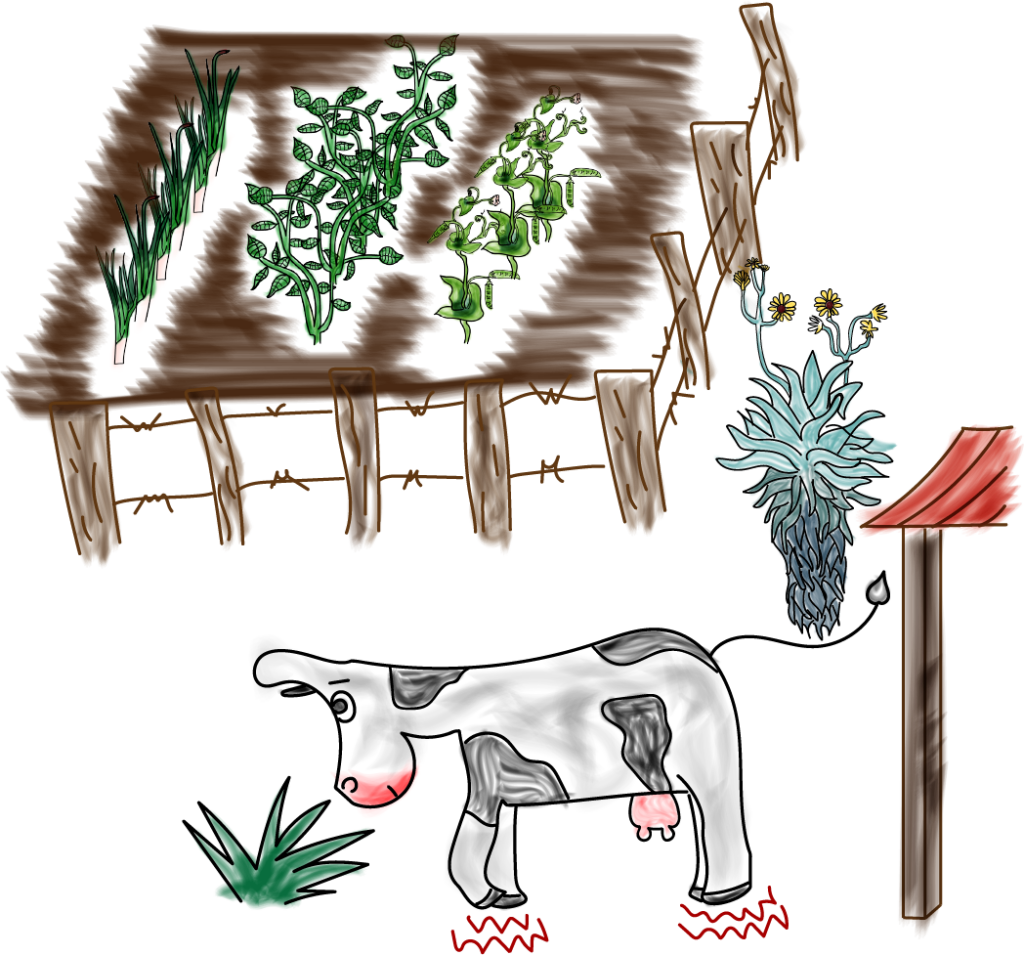 Filemona is a Holstein cow that produces milk for doña Úrsula, who bought her, and don Eustasio, who milks her. Both of them sell the milk jointly to a cheese factory. Recently, Filemona had to adapt to cold weather because the lack of land in the lowlands made Úrsula take her to don Eustasio at the Páramo. She likes the grass in there, but she has heard that her bites and hoofsteps may be affecting the ecosystem. Nevertheless, she is happy that thanks to her, both her owners share and socialise with the owners of other cows.

Goes along with:  Campesinos, paramunos,

Sometimes doesn’t go along with: Native species, the Páramo, the Cloud Forest, Conservationists (specially when many of her friends are together in the same place). 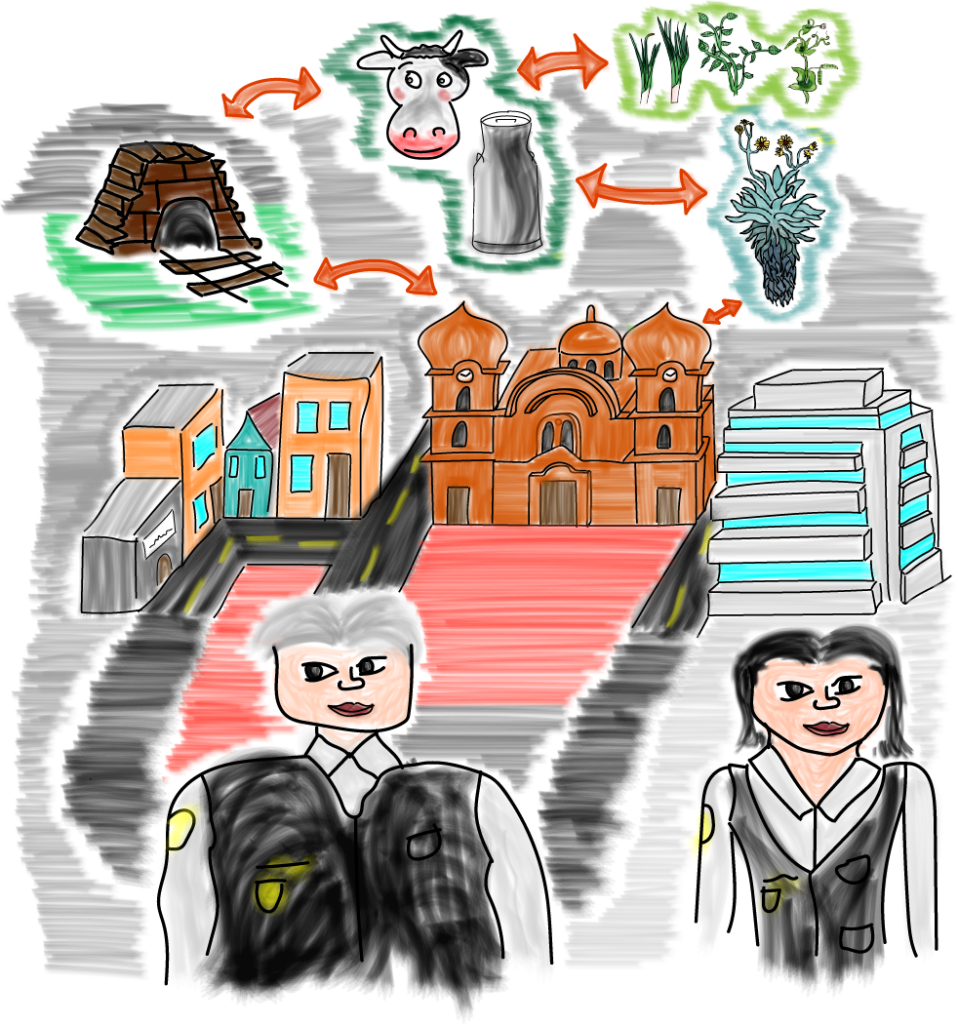 Civil Servant and Institution are whom often have the most decision-making capablities to defnie what can and cannot be done in the Páramo as they are the main contacts for consultation when the government has to create legislation. They must safeguard the Páramo, but also ensure that its inhabitants can live well and that different economic activities are compatible and sustainable. Similarly, they must reach agreements with local communities. Unfortunately, the inhabitants of the Páramo - Campesinos, Paramunos or Conservationists - do not feel they are being listened to. Civil Servant and Institution rarely belong to the Paramo and are generally sent from outside.

Goes along with:  Conservationists, the government.

Sometimes doesn't go along with:  Campesinos and Paramunos (when they do not feel listened to) the Páramo and the Cloud Forest when policies favour extractive acitivties. 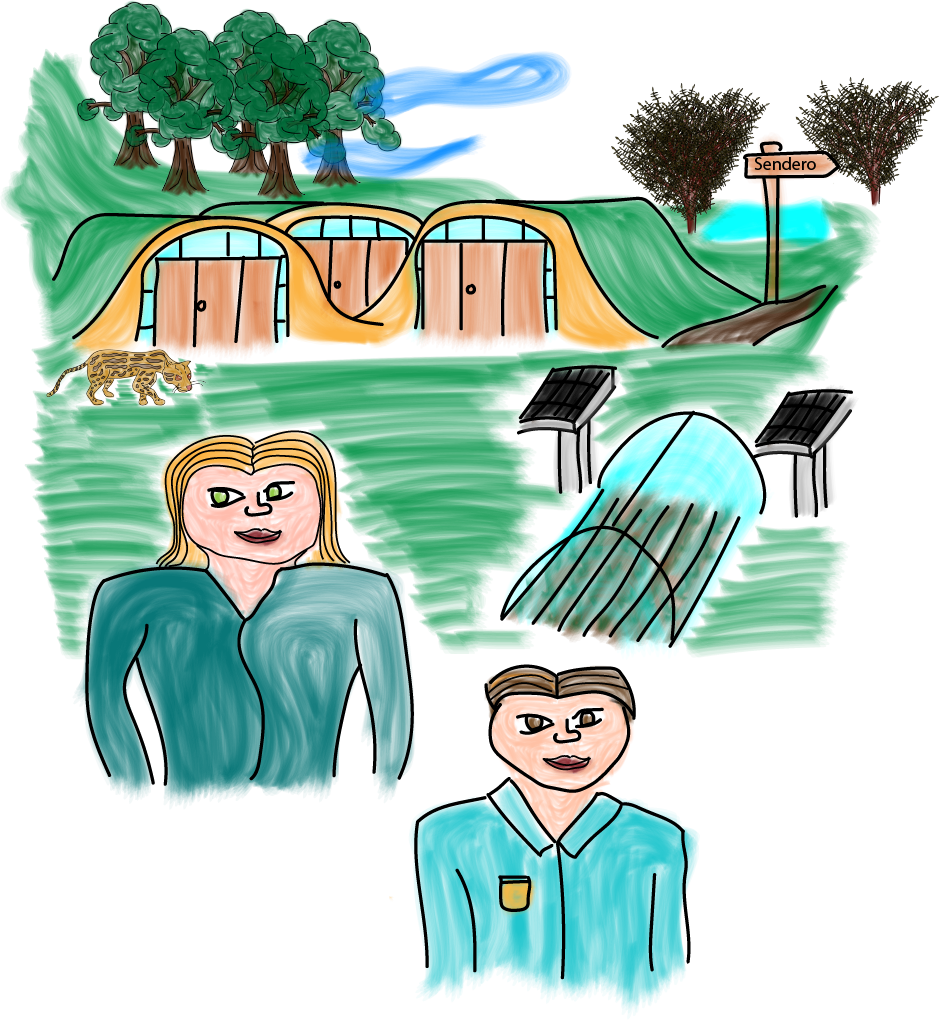 Mariana and Fernando love the Páramo, even though they were not born there. They consider it a very important ecosystem that must be protected for the enjoyment of local people as much as visitors, tourists and travellers. Hence, they have adapted a large portion of their property - which even has a lake - exclusively for eco-tourism and they are building eco-cabins to lodge visitors. They know about sustainable agriculture, but their main interest is ecosystem conservation. They are often concerned about certain practices like intensive grazing or the use of chemical fertilisers.

Goes along with:  The Páramo, The Cloud Forest, Other Conservationists.

Sometimes doesn’t go along with:  Cows, Extensive Crops, some Campesinos with non-sustainable practices. 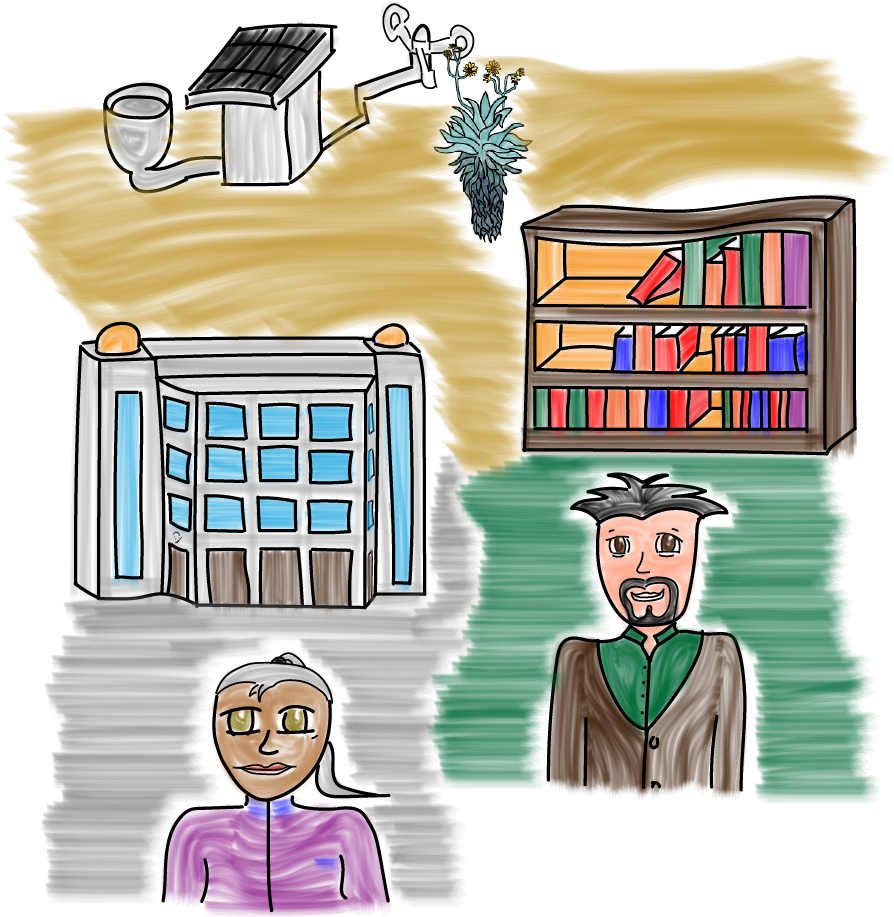 Ana is professor of biology at a university in Tunja and Jonathan is a researcher in social sciences at a university abroad. They work together on a project about the Páramo, which aims to collectively build alternatives for the Páramo to be sustainable, not only as an ecosystem, but also for those who have lived in there for a long time. Although they have worked in, and know, the area well, they are aware that the only way to generate truly useful knowledge is by listening to local inhabitants and experts, and by building that knowledge with them. In that sense, they enjoy facilitating the creation of that knowledge as well as contributing from their experience as academics. One of their biggest goals is that this production does not remain on bookshelves, but that is actively used by all those who can benefit from it.

Goes along with:  The Páramo, The Andean Cloud Forest, campesinos, conservationists and paramunos when researchers actively listen to them.

Sometimes doesn’t go along with:  Civil servant and Institution when policies hinder good ideas, mining companies when they do not listen to evidence. 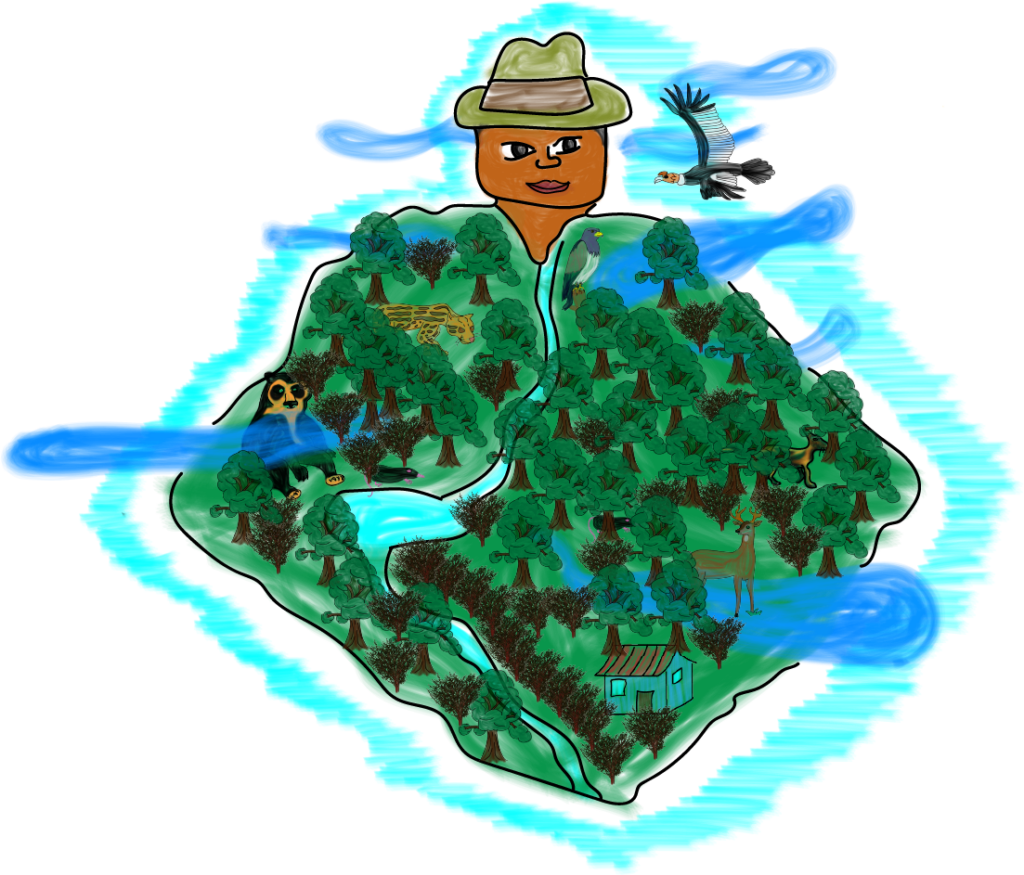 The Cloud Forest is an ecosystem high up in the Andes, although often the Páramo is above it. It has a dense vegetation with high oak and encenillo (Weinmannia tomentosa) forests, as well as some non-native species such as eucaliptus and pine some times. Life in it is abundant, and it is particularly popular amongst big wild mammals. Like in the Páramo, the soil is fertile, but often felling and planting crops, particularly wood production, as mineral extraction, can destroy it rapidily. It is one of the most popular areas for ecotourism. 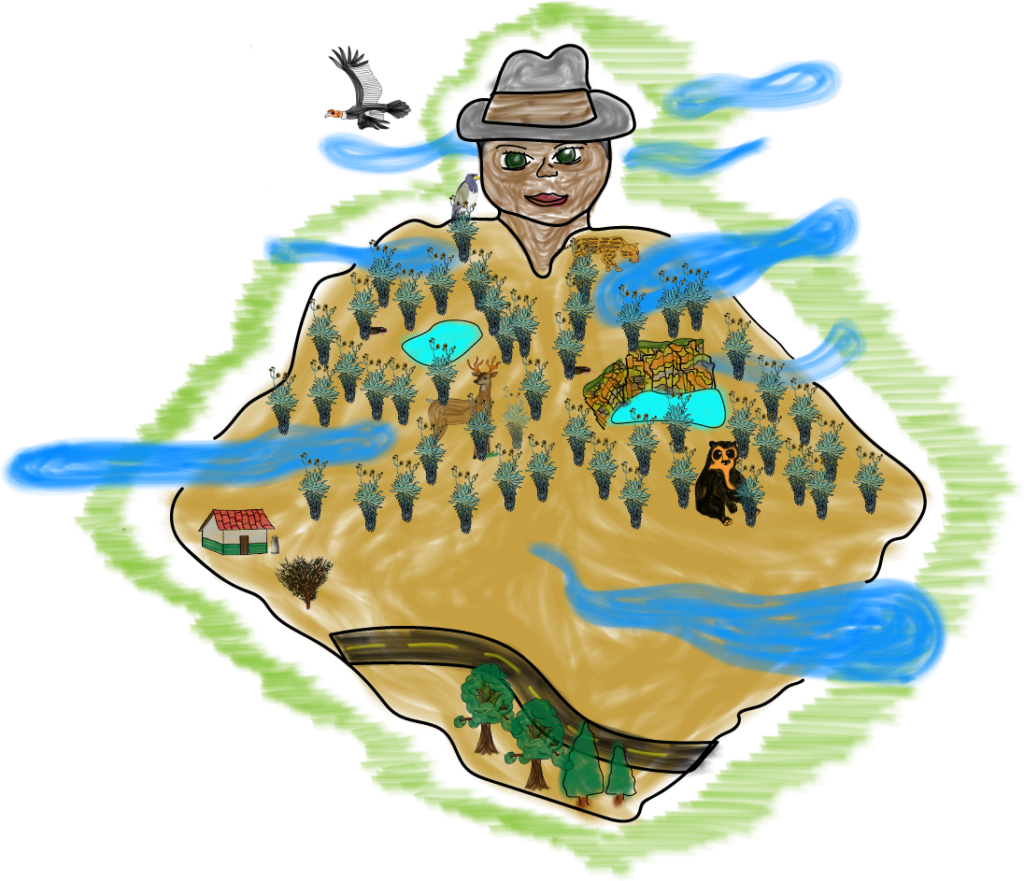 The Páramo is an eco- and sociosystem at the top of the Andes which captures the thin layer of water in the mist and brings it to the ground, thus producing water for towns and cities at high altitude. Life in it is delicate, but not for this it is less abundant, with a wide variety of species florishing in its hillsides. Like its neighbour Cloud Forest, its soil is fertile, but its cultivation can harm local species and weaken the ecosystem. Simlarly, extensive burning for crops can affect it beyond the point of recovery. The presence of minerals in it, and sometimes the building of roads, often brings problems to its survival.

Sometimes does not go along with: Cows, Campesinos (if land use is extensive), Civil Servant and Institution (when they bring large projects).

Manage Cookie Consent
To provide the best experiences, we use technologies like cookies to store and/or access device information. Consenting to these technologies will allow us to process data such as browsing behaviour or unique IDs on this site. Not consenting or withdrawing consent, may adversely affect certain features and functions.
Manage options Manage services Manage vendors Read more about these purposes
View preferences
{title} {title} {title}